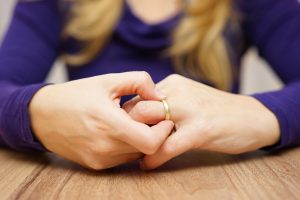 Hardly a day goes by without someone asking me about the impact of Covid on divorce. Whether out of humor, or having read an article about the sharp increase of divorces in China after quarantine and court openings, there was (and maybe still is) a feeling that couples forced to live together without the distractions of friends, work or other outside activities, would not bode well for marriages. And for couples with children, the pressure of homeschooling while working from home put further strain on relationships. I was always suspicious that the reports from China about the rise in divorce was caused not by more troubled marriages but by the backlog of couples that would otherwise file but were not able to because of court closings.

In the United States, sufficient data is still not out to provide any definite response. However, a recent study from the Bowling Green State University’s Center for Family and Demographic Research has shown some unexpected results. Having analyzed 5 states which have already collected their 2020 divorce statistics, data shows an actual decrease in the expected divorce rate in 4 of the 5 states. For example, in Florida, divorces dropped by 28%. Reasons for decreased divorce rates include health concerns, court closures, economic uncertainty, the benefits of living together, shared expenses, child care, and hesitation to go through with divorce.

Many people have lost their jobs, and their financial situation may have impacted their ability to afford lawyers for divorce proceedings. They could no longer afford to live in two separate homes, and the financial burden would be too great. So, these couples are forced to stay together for the time being. Others took the time to really dive into their marital issues, and didn’t like what they were seeing, so they chose to push forward with divorce and conducted meetings via zoom. Then, there are others that did the opposite, and really worked on their marriage and reaffirmed their commitment to one another.

The bottom line is that a definitive response on this question is premature. Yet, while the answer to this question remains unclear at this time, what I am seeing is an impact on how couples are getting divorced. I have been told by litigation colleagues that they have seen a decline in divorce proceedings not only because the courts were closed and there is a backlog of cases, but that there is an increased resistance to invest in fighting over the divorce when there are more important priorities to deal with.

At the same time, I am hearing from my mediation colleagues that, like most therapists, they are busier than ever, helping couples work out their marital conflict and divorces together – instead of against each other. At a time when there are so many difficult questions, not to mention financial and emotional strain, most couples would rather try to figure things out together, especially while they are living under the same roof. One thing is certain – this past year has really put priorities in perspective for most couples, and they are consciously choosing not to fight and waste money.

We have seen an uptick in mediation and collaborative divorce interest with divorcing couples appreciating the value of preserving resources and a cooperative working relationship during these challenging times. Within the professional legal community, I am seeing a shift of more lawyers turning to resolutions outside of the courtroom. As an example, I have conducted 3 different divorce mediation training seminars over the past 9 months. More than ever, we are finding that traditional divorce litigators are signing up to get trained in mediation so that they too can serve clients who are seeking to avoid the adversarial litigious divorce.

One additional certainty brought about by Covid is the intensity that it has created. Life is short, and tomorrow is not promised. For many couples, Covid strengthened their relationships, while others experienced the opposite, and have chosen to part ways. Couples are choosing to end their relationships in an amicable fashion. Mediation and Collaborative Divorces are becoming more and more popular because people no longer waste money, and a commodity worth far more – time and future co-parenting relationships. Eventually we will know what the true impact of Covid, but what we have seen is a shift in values that we can all appreciate.

To read an article on The Mediation Di-Stress Curve: Showing the Tension between Decision Making and the Stress to Get There?, click here.