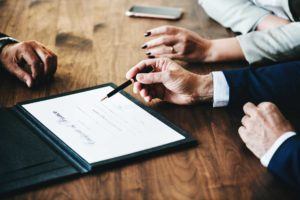 Unlike divorce, there is no need to file a Complaint with the family court to legally separate from your spouse. You and your spouse can simply choose to separate and do not need a judge’s permission in order to do so. There is no need to file any kind of paperwork to legally separate from your spouse–and you don’t need permission or have to cite a reason for your decision in doing so.  Documenting your decision can be useful for a number of reasons–if only to set expectations between you and your spouse.

In order to take care of practical elements during your time apart, you will want to create a document called a separation agreement. This written contract between you and your spouse that generally remains in place until you reconcile or until your divorce is finalized. These agreements typically address issues such as:

If you are able to work out the terms of the agreement on your own, in mediation, or with the assistance of an attorney, there is no need to go to court. Once the document is signed and notarized with the required legal formality, the terms are binding.

When Does A Legal Separation Agreement Require A Court Appearance?

The reason many couples choose to go with legal separation instead of jumping straight into a divorce is because it is much easier and in many ways accomplishes the same goal. Since these agreements usually have complex financial and custody issues involved, it is best if both parties have their own attorneys involved, even if they are able to come to a major agreement on the basic terms before they turn to a lawyer.

Should you and your spouse not be able to agree on the terms of your separation, the first step would be to work with a mediator who can help you reach a comprehensive agreement. Of course, you can always go to court and ask a judge to establish temporary support and custody and other temporary orders to address other issues in your separation. Such court actions, however, are extremely rare.

What Are Some Other Reasons You May Choose Separation Over Divorce?

In addition to those reasons listed, others just want to keep the door open to reconciliation.

How To File For Legal Separation In NY or NJ?

If you are filing in New Jersey or New York, you should know that since no court needs to be involved, an agreement can be reached as quickly as both spouses can agree on terms. The average agreement will be settled between both parties after several months of negotiation. It should be noted that all marital issues, be they custody of children, payment of obligations such as child support and alimony, and division of marital assets, must be included in your agreement in order for it to be valid.

Even if negotiations are amicable, splitting a jointly owned business or children’s college savings will most likely take longer than a couple with no children and with only a home and two cars to split. Many of the issues that need to be worked out can be challening and the role of the mediator is to help couples resolve these differences together, in a problem solving framework, instead of against each other in an adversarial framework.

Contact Us Today To Learn More About Legal Separation

Whatever your reason for wanting to separate, making the decision is often easier when you understand some of the benefits and limitations of these agreements, as well as some of the basic requirements.

For further information or to schedule an appointment, contact the Berner Law & Mediation Group.